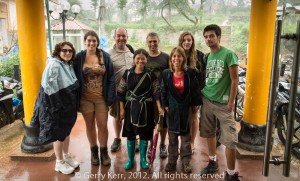 We headed out of the village and met up with a group of locals who would be “assisting” us on the trek. Little did we know how much we would need then as the day progressed. We left Sapa round 9 or 10 in the morning and starting walking. The first mile of so was very tame, but when we left the road and headed cross country, it was a very different story.  What was incredible was, here was this bunch of westerners in hi-tech hiking boots slipping & sliding down these rough paths when the locals, sometimes in flop flops were strolling along with no difficulty at all and having to help out these clumsy westerners . If you are as unfit as I am, the next 7 or 8 hours were extremely tough and  the least said the better! We stayed that night in a local house in the middle of nowhere, but, boy was I glad to see a shower and a few beers that night! Anyway, here are some of the images from the two days in Sapa.